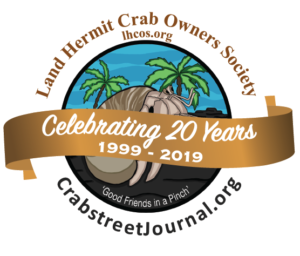 The Land Hermit Crab Owners Society celebrates its 20th anniversary on August 8, 2019. That, of course, means we are having a giveaway!

1. Draw/Paint/Write/Sculpt what LHCOS means to you
2.Email your entry (or a picture of it) to crabstreetjournal+LHCOS@gmail.com
3.  All  will entries be published on the LHCOS.org website

4.  The giveaway is open to all – anyone under 18 must have parental permission to collect the prize

5. One entry per person

6. Entries are due August 31, 2019 Midnight CST
7. Winner will be drawn at random from all entries

The prize will be a Crab Con 2019 T-shirt, a LHCOS 20th Anniversary logo T-shirt and $10 in credit to spend with any of the LHCOS Approved Sellers.

The Land Hermit Crab Owners Society started as a newsletter for Land Hermit Crab Care 101 (1994) operated by Vanessa Pike-Russell. Vanessa would receive many emails via her website and would invite them to join the mailing list so that she could share new caresheets and articles as she published them. Then when OneList merged with eGroups (and later became Yahoo eGroups). Vanessa decided to turn it into an online society which was named Hermies – a nickname for Hermit Crabs.

Vanessa invited notable crabbers CrabLover Don, Motown Jenn (Jenn Borgesen) and others to be moderators. They each invited people with land hermit crabs that they knew and soon there was an active group of dedicated
land hermit crabbers where questions and ideas were flying fast.

Other notable crabbers joined, including Carol of CrabWorks who was famous for having the oldest land hermit crabs kept in captivity (Jonathon Livingston Crab and Crab Kate)and had a wealth of experience.

We started creating documents on eGroups and realised that we needed to create a website where members of the LHCOS could submit content and keep the information up to date. A book was suggested but we wanted something more dynamic – and thus The Crab Street Journal magazine was formed and launched October 17th, 2001.
20 years later here we still are providing care information, educating the public and advocating for more humane treatment of hermit crabs.

Designate Funds for Claws in the Classroom